The Razorbacks were competitive in the first half, but Hot Springs (6-2, 4-1) scored five unanswered touchdowns in the final two quarters to rout Arkansas High, 55-15.

Arkansas High (2-6, 1-4) gambled on fourth down at its own 39 and didn’t convert. The Trojans needed only five plays to score with Derrick Hicks plunging in from the 1. A bad snap prevented the PAT, and it was 27-15 with 7:59 left in the third quarter. 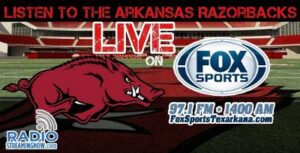 Kyin Jamerson intercepted a Razorback pass on the next play from scrimmage. Sophomore Justin Washington scored on a 17-yard run. Juan Martinez’s kick was good, making it 34-15. Senior Hicks returned a punt 55 yards for six points at the end of the third period.

Junior quarterback Nate Wall played well for the Hogs. He completed a 43-yard pass to Deandre Burnell in the third quarter. Kamryn Holloway, Jeremiah Jones, Courtland Loudermill and William Dunbar all contributed for the Razorbacks on offense.

Hot Springs’ offensive line dominated and was selected MVP as a group.

The Trojans remain third in 5A South behind Camden Fairview and Little Rock Parkview.